Skip to content
Hey, y’all! How are you this fine Monday? I am busy as a little bee, working really hard on an outline for the project I’ll be writing for Camp NaNoWriMo in April. (Stay tuned for a fun sneak peek!) 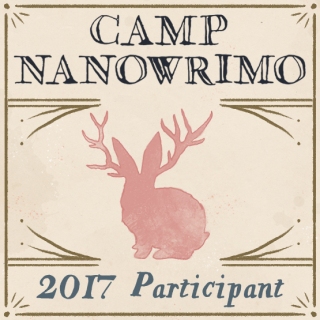 Ever since my friend Hannah invited me to participate in Camp last April, I have loved and looked forward to it. Camp NaNo is a one-month writing session online (CampNaNoWriMo.org) where one may join a cabin of writing buddies. I like Camp better than regular NaNoWriMo (National Novel Writing Month) because of the cabin atmosphere and being able to set one’s own goals rather than being mandated to do 50k words. Sometimes I only have time for 20k or so; other times, I fly to 60+ thousand words before the third week of a month. Either way I go, the words build up into something amazing.

This month’s project, as I mentioned, is an outline. I’m breaking things down chapter by chapter. This worked well for me for a recent TV show pilot, which I wrote in only ten days, thanks to the outline I used. This story made it all the way to the Quarter-Finals of the 2016-17 Fresh Voices Screenplay Competition, and it was also nominated for an award (Best Role for a Leading Man). [I’m still waiting to hear about the awards short list, which comes out later this month.]

Since that outline sparked such great results for me, I thought I’d apply the outlining process to an upcoming novel. Then I realized there was enough of a backstory to do a novella prequel too. So I wrote the outline for that in thirty minutes flat. I’m pretty excited about both stories, and that’s a good thing heading into a Camp NaNo month. Enthusiasm and adrenaline (and hot chocolate!) fuel me when I’m writing a fast first draft, NaNo month or not. If I don’t truly love the story or project I’m working on, then I typically dread sitting down at my computer. However, when the joy bubbles up from deep inside and the ideas are gushing forth… ooh! At those times, I wish I typed faster!

Here’s a SNEAK PEEK of my latest project*:

(From my novel backstory)

The bell for third period had barely stopped clanging outside Algebra I when the door flung open and slammed against the wall. Heavy footsteps ground against the concrete floor, but Mallory didn’t dare look up. Instead, she slunk deeper in her next-to-last-row seat and doodled absently on the cover of her notebook. Please no… Finding an ounce of courage, she peeked up just in time to see her dad stomp past the objecting Ms. Bleeker and up the aisle toward her. Certain her face was blazing redder than Mike Craig’s carrot-top dreadlocks, Mallory scrambled to shove her book, math journal, and pen in her book bag. Strands of dirty-blonde hair fell across her eyes, but she didn’t waste the precious seconds it would take to brush them away.

The jerk to her upper arm let her know she wasn’t fast enough.

“Ow!” She tried to yank free, but her father’s grip was tight enough that she’d sport bruises for weeks. She snatched the strap of her bag before being propelled up the aisle. The bag whacked against her leg and swung back behind her, coming to bump against her again moments later.

“Hush up, girl.” Dad’s voice was a simmering growl. Once they were alone, sure as the sun comes up each dawn, it’d boil right over. Whether the proof would be in only his raised tones or in an accompanying slap or punch was yet a mystery.

One she didn’t care to solve.

Mallory swallowed any other complaints her mind thought up.

“Mr. Jones,” Ms. Bleeker said as she stepped in the pathway to the door. “Mallory is required to attend this class. She’s behind from all her absences as it is.”

Dad jabbed a finger in the teacher’s direction. Mallory didn’t have to look at his face to know it was mottled, desperately in need of a shave, and pimply as ever. “Get out of my way, woman! My girl ain’t got time for school if she ain’t got time for her chores.” He shoved Mallory forward.

Just as she wondered if he meant the cereal bowl and spoon waiting in the dry sink back home, the toe of her ratty sneaker caught the leg of Kayla’s chair, and Mallory fell hard, clipping her chin on the rounded corner of Stephen’s desk.

What projects are YOU working on in March?
If you are also a writer, do you like outlining prior to writing?
Why or why not?
What type of non-alcoholic drinks do you
enjoy during early-spring months?
(My favorite is hot chocolate!)
Join the conversation! I love hearing from you.
Like this article? Share it.
Want more? Follow by e-mail.