Skip to content
This year is already flying by fast. Something else that goes by fast is a Karen Witemeyer novel. Somehow, I always zoom right through them. And I haven’t met one yet that I haven’t liked. I’m so excited to have Karen here at Writing to Inspire today!
Where Do You Find Your Inspiration?
by Karen Witemeyer
One of the most common questions readers ask authors is, “Where do you get your ideas?” As a creative person, I long to say that my ideas sprout naturally from the fertile soil of my imagination. But alas, I cannot make that claim with a clean conscience. So I’m going to share with you the deep dark secret hiding in my authorial closet . . .
I get my inspiration from other writers. Gasp!

I know, I know. I’ve completely disillusioned you, haven’t I? Well, do not fear. I\’m sure there are many successful authors out there who are creative geniuses, who produce unique plots and original characters with a simple flip of a neural switch in their mind. You may admire them all you like. But, me? Well, I’m like one of those chemical reactions you studied back in high school that needs a catalyst to get things started.
Now, I’m not talking about plagiarism or stealing someone’s idea. Those are crimes deserving of flogging, to my way of thinking. What I’m talking about is the spark that ignites when you read a passage or watch a scene in a movie that sets the creative fires burning in new and exciting directions.

So here are some of the catalysts that set off the spark for my stories:
A Tailor-Made Bride – My heroine, Hannah Richards, is a 19th century fitness maven who was inspired by Deeane Gist’s cycling heroine in Deep in the Heart of Trouble. There’s also a touch of reality television inspiration since Hannah is also a seamstress and works a little “make-over” magic on Jericho Tucker’s sister, Cordelia.

Head in the Clouds – Inspired by my love of fairy tales and my favorite book from classic literature, Jane Eyre. I also had the idea of blending my two favorite types of historical novels (regency romance and western romance) into one. So I have a British nobleman running a sheep ranch in Texas who hires a governess to tutor his ward.
To Win Her Heart – The parable of the Prodigal Son. I know what you’re thinking. Lots of stories have used this parable as a foundation for a spiritual thread or character arc, so how did I make this original? I asked, “what if”. What if instead of ending my story with the hero repenting and returning to God, I started it there? Think of it more as an epilogue to the famous story. I wanted to know what life was like for the young man after the fatted calf was consumed and the party was over. How did he relate to his bitter older brother or the servants and townspeople who were only too aware of his past arrogance and wild living? I decided to explore these questions in a new setting—1880s Texas.

Short-Straw Bride – Inspired by the musical Seven Brides for Seven Brothers. My story has four brothers instead of seven, and the men don’t sing and dance while they do their chores. However, the spark came when I thought about this movie and then asked, “what if”. What if, instead of having the heroine agree to a marriage of convenience at the beginning of the story, the brothers drew straws to see who would marry her when a good deed goes awry? And what if, instead of all the brothers being named in alphabetical order after Bible characters, my four brothers were named for heroes from the Alamo?

Stealing the Preacher – This is a follow-up to Short-Straw Bride, so I already had my hero, Crockett, and I knew he wanted to be a preacher. But who should I get as a heroine? Who would provide sparks and humor and crazy situations? Why, an ex-outlaw’s daughter, of course. Sparks fly not only between Crockett and Joanna, but also between Crockett and Joanna’s father, Silas. 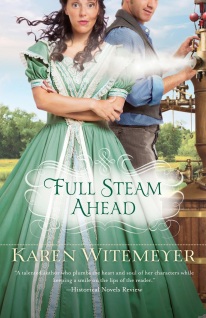 Full Steam Ahead – What inspired this story? My husband’s love of action movies. Ha! I decided I needed to blow things up. Nothing adds more drama and excitement to a story than a good explosion. At first I thought I would make my hero a mad scientist with a chemistry lab, but my high school chemistry class was way too far in the past. So I did a little research and discovered the tragic but perfect-for-my-story history of riverboat explosions. Thousands of people died every year in the 1840s and 1850s because of boiler explosions. My hero’s on a mission to change that. Oh, and just because I thought it would be fun, I threw in some piracy. My heroine is from Galveston, the home of legendary pirate Jean Laffite. She’s on a mission to protect her family’s legacy—the Laffite dagger.

Love on the Mend – This novella is a follow-up to Full Steam Ahead, so inspiration came from the previous novel. My hero started out as a runaway boy in Full Steam Ahead, then grows up to become a doctor. His past is hinted at but never revealed in the novel, so I had fun brainstorming ways to force him to return home after 17 years away. He returns to lay his past to rest, only to find his past still alive and kicking.
Love on the Mend is a digital-only release that became available February 3. It\’s available for all e-readers, or if you held out on the e-reader, like I did for many years, you can read it on your smart phone or computer with the free Kindle app. Click here to order.
·         So, do you ever try to rewrite endings to movies?
·         Does watching a television show spawn daydreams or story ideas?
·         When you finish a book, do you imagine the characters’ lives continuing past the last page?

Maybe you are a catalyst-type, too. Yay!

Christy Award finalist and winner of both the ACFW Carol Award and HOLT Medallion, CBA bestselling author Karen Witemeyer writes Christian historical romance for Bethany House, believing the world needs more happily-ever-afters. She is an avid cross-stitcher and makes her home in Abilene, TX, with her husband and three children. Learn more about Karen and her books at: www.karenwitemeyer.com.


Karen, it’s so great to hear how you find the inspiration for your spunky novels. Ideas can come from so many different places, and we know God works in mysterious ways to provide those moments of genius.


Readers, I’d love to hear your answers to the questions Karen asked at the end of her article. Share your stories in the comment section below!

Monday, February 23 – Season of Waiting: Part Two
Monday, March 2 – Book Review: The Prayer Box by Lisa Wingate
Thanks for stopping by today! I look forward to hearing your thoughts in the comment section below. And don’t forget to drop by next Monday for my latest article.
Would you like to be my guest? Here’s how to submit an article.
Do you need a proofreader? Here are the services I offer.

11 thoughts on “Be My Guest: Karen Witemeyer”