Skip to content
It was an ordinary Friday afternoon. My dad and I were running an errand when my mom called. She had peeked out the house window and seen something crazy down the street. Out of the ordinary doesn’t begin to describe the event of Friday, June 20, 2014. 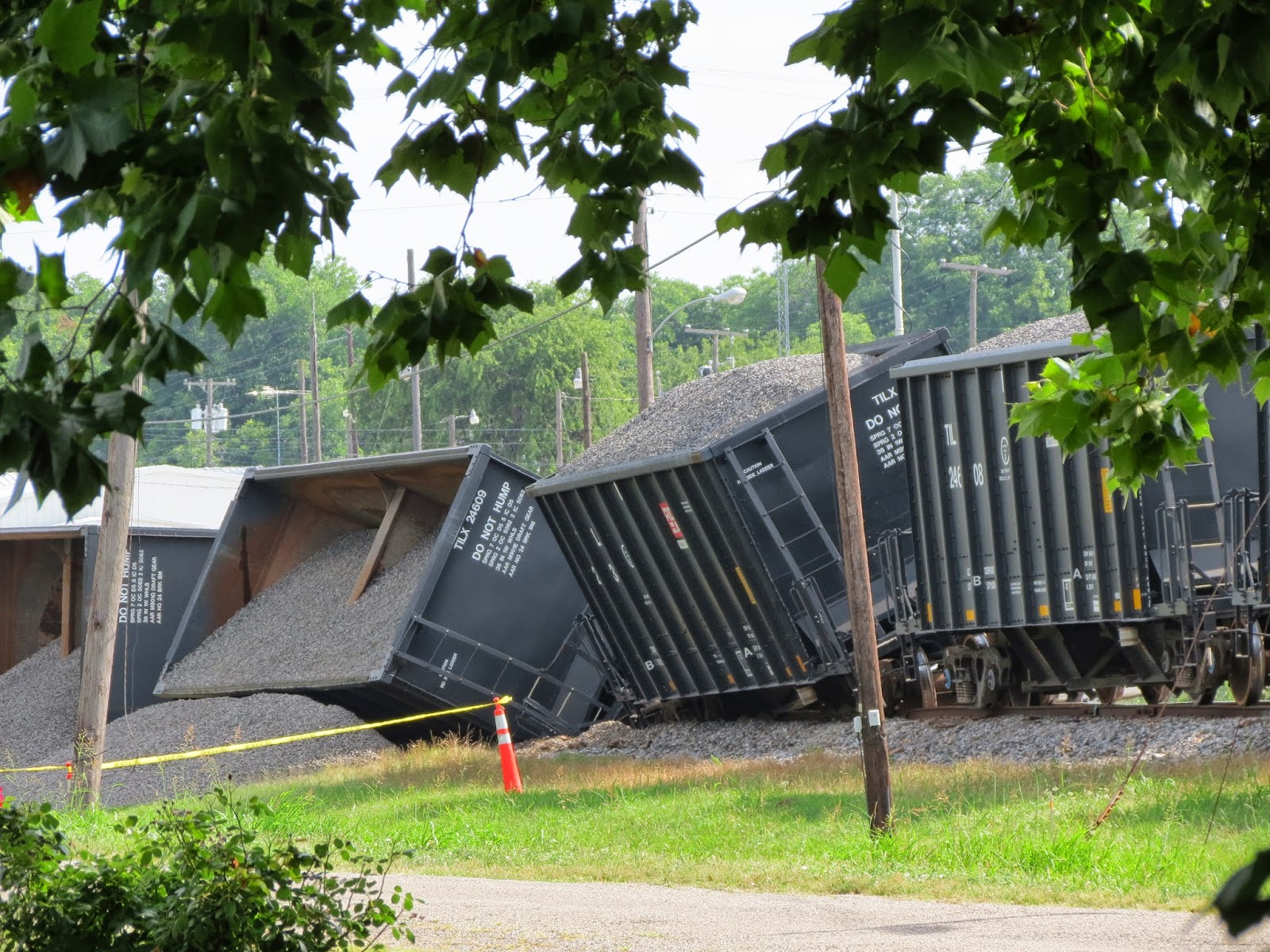 Four train cars derailed.
As in, came off the tracks.
Yep. The train that had gone by our house just before Dad and I left apparently had trouble of some kind, and four of the rock-carrying cars toppled over, leaving a fifth car leaning precariously. The weird thing was, with the air conditioners going, my mom hadn’t heard the crash from inside our house.

When Dad and I returned after completing our errand, sure enough, there was a sea of rock splattered across the grass down the road from our house. Four large, black train cars lay on their sides, rock still half filling them. The fifth car worried me, as I was certain it would fall and crush someone, especially once workers arrived to clean up the huge mess. 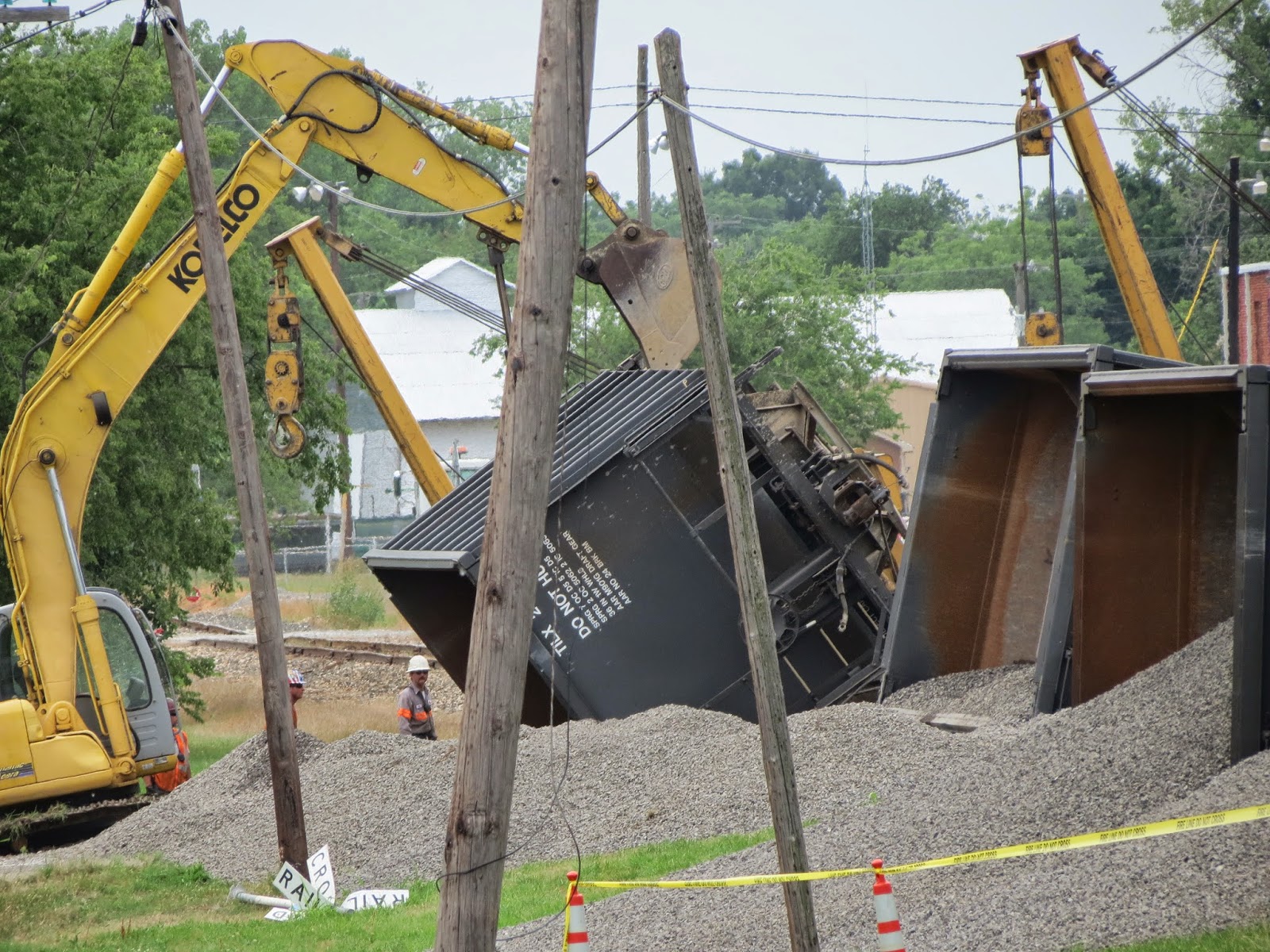 It took all day Saturday, but the crews were able to get the cars righted once more. First, they emptied out the rest of the rock. To make sure they got it all, they used two cranes and a backhoe type machine to turn the cars upside down. Then they turned them right side up and suspended them in the air above part of the track that was still intact. The men on the ground then came in and assisted the crane operators in attaching new sets of wheels to the bottom of the cars. Once that task was completed, one of the cranes pulled the fixed cars farther down the track so they could repeat the process with the other cars that needed to be put back on tracks that hadn’t been destroyed in the derailment.

They brought in an engine to pull the rear of the train back away from the messed-up section of track. Once all the toppled cars were moved down the other side of the broken section, the engine hooked up to the remaining cars. When the engineer tried to pull the train cars, the engine’s wheels spun and spun, flinging orange sparks against the ground. With the leaning car still attached, the other cars wouldn’t budge, even though a couple of crew members put some tool in front of the wheels to help right the leaning car, which was still filled to the brim with rock. After several unsuccessful attempts, they decided to uncouple the leaning car from the rest of the train. The engine was then able to pull the upright cars to the other side of the highway that sits in front of my house, so it would be out of the way of fixing the tracks.
So, they brought the cranes back over to lift the super-heavy leaning train car. They slowly took it down to a part of the track that was still lined up right. There the ruined wheels were exchanged for new ones. With that job finished, the guys stopped work for the day.

As I’m writing this article in my living room on Sunday afternoon, a crew is outside cleaning up the carnage that used to be railroad ties and train tracks. I’m not sure if they’ll get around to scooping up the spilled rock today or if that will be done tomorrow, when you’re reading this. It’s such a huge mess, the cleanup process takes multiple days. Each step gets its turn, with each crew member pitching in at the right time. It’s quite the orchestrated chaos, if you ask me, but the job is getting done.
I’m thankful that no one was hurt, either in the original crash or during the cleanup. It did concern me when I first saw the disaster, because there have recently been several children riding their bikes up and down the two roads parallel to the tracks. Praise God they’re all safe and weren’t injured in this catastrophe. This might have been a much more somber event, but I’m so glad it wasn’t.
Seeing the process of cleaning up the derailed train reminded me of how God takes my brokenness and cleans me up and fixes me one little piece at a time. It’s the reminder and encouragement I needed this weekend. I’ve been struggling because promises take so long to be fulfilled sometimes. The more years that go by, the harder hope is to cling onto. But through this weekend’s craziness and Sidewalk Prophets’ CD Live Like That, God showed me that He hasn’t forgotten me. He’s the God who is more than all I’ve ever wanted. He’s saving me every day, through every pain and doubt and struggle I face. He’s scooping me up and hugging me tight, whispering words of comfort into my heart. Though I may struggle to find the courage to stand firm in my faith at times, I will never lose sight that God is still God and God is still good. He’s got me in His hands, and He’s leading me into the future He has designed for me. I trust Him with my life and my dreams, because He is my Everything.
Readers, what exciting things happened during your weekend? What lessons have you learned from the weekend that you can apply to your life? Are you holding onto the hope God is giving you?
Would you like to be my guest? Here’s how to submit an article.
Do you need a proofreader? Here are the services I offer.